We started off the New Year this morning with some nice sun, however it was a bit cool, but warmed up as the day went on. 1st thing on the agenda this morning is the gym for me and the pool for Judy.... gotta keep up the exercising!
I spent most of the morning on clean up. Cleaned the dust off the motorhome which is a bigger job than you might think. Windex seems to work real good on the fibre glass sides of the motorhome I found out today. After the motorhome, it was time to clean up the motorcycle. It was dirty, and took over an hour to get it the way I wanted it, but, I made it. Looks good, and is safely tucked away in the garage till the next trip!
John and Pat came over in the afternoon for a "New Years Day Hot Tub Party" with us. It was real nice down at the pool sitting out taking in the sun. One think about Yuma, lots of sun! It was about 20 degrees or so this afternoon and it felt real good. We spent a couple hours at the pool area talking to some of the other people from the resort!
Judy made up a great dinner of ham and potatoes and veggies for us, so we feasted on that. We didn't get around to taking pictures at the pool as we all had our hands full, but I did manager to get a pictures of John and Pat after dinner at the RV for the blog, just to let everyone know, they did in fact make it to Yuma! 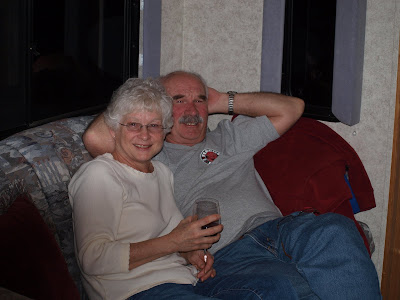 I had PVR'd the "Winter Classic", which was the outside hockey game between Boston and Philly this afternoon, so John and I took the game in over supper time. Great game, with Boston coming from behind for the tie, and then winning in OT.

John and I were just getting is shape as far as watching hockey is concerned, as tomorrow we go to Phoenix to watch the Coyotes take on the Detroit Red Wings at the Jobing.Com Arena in Glendale. Should be a great game and we have real good seats only 10 rows up from the ice surface. Can't wait. We are going to leave early tomorrow and visit a park in Phoenix first, and then have dinner and the game. Game time is 6:00 p.m. so that will put us home past midnight so don't be looking for a blog on Sunday morning as it won't be there! I promise to bring my camera and get some shots at the game and the park!

Well, here is hoping everyone has a great New Year!