What an oil change that was...

Hey, here I am back in Blogland after a 3 day absence... We were having what I considered major problems, so was way too tied up to sit down and write a blog, and was far too frustrated anyways.

It all started on Thursday afternoon when I decided I wanted to take our Motor Home in for a simple oil change... right! I had left it a little late in the afternoon to go in to the Superlube in Lake Wales, but I knew they remained open until 7:00 p.m. so I figured I would be safe. 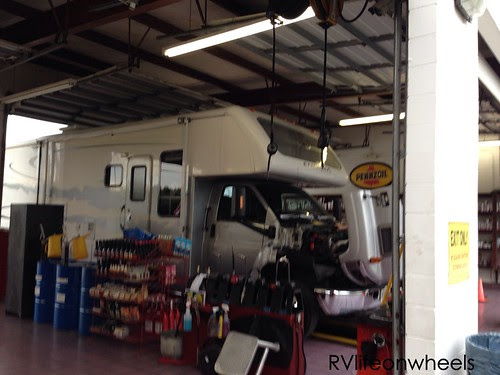 Even standing at 12 feet high, our Gulf Stream still fit inside this oil change facility. Last year I went to the Superlube in Winter Haven, and they did a good job, so I decided to go again, this time in Lake Wales, as it is a lot closer to our Frostproof location. I asked for a full service oil change package, and the Manager asked me if I wanted them to change out our fuel filter on our Duramax Diesel engine. He said he could install this filter for us in no time! I said sure... why not, as it was due for a change anyways. (BIG MISTAKE!) 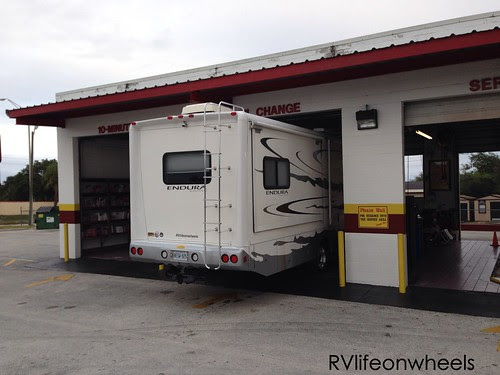 As you can see our 36 feet of MH did not quiet fit inside the building. The only way out is to back out.

It took the Manager 1 hour just too remove the old fuel filter, as he said it was put on too tight by the last mechanic. Hmmmmmmm.... not sure about that one. Finally he got it off, and finished up the oil change part of the project, and then installed the new fuel filter. Now if you have any knowledge of a Diesel engine fuel system, you know that the system has to be primed before the engine will re-start, due to air being introduced to the system. Air in the fuel lines equals engine that will not start...period!

Mr. Murphy soon showed up, and the Manager found he was unable to prime the fuel system. He was trying various things, and I could soon see that he was on the cell phone making phone calls. It quickly came to 7:00 p.m. with no engine working, and him working with a bit of sweat on his forehead! He tried just about everything he knew to get this engine going, and a few things other people working for the Company said to try on the phone... nothing worked... no start!

It is now 10:00 p.m. with one very tired and frustrated customer, and Store Manager. He said it was time to stop, and try again in the morning. Problem was he could not close the doors of the shop as the MH was sticking out! He had to get his Manager's approval to call in a tow truck and pull our unit out of the garage, and move it to the parking lot! ($125.00 later for a tow truck!) I had to pay them $103.00 for the oil change and two new windshield wipers I had them install. So... looks like they are losing money on this one.

After being rescued by Judy and Cheryl, we stayed the night in Tom and Cheryl's 5th wheel. I was back to the rig a 9:00 a.m. the next morning for round two! MH was parked outside in the rain, so work had to commence out there as we could not start it to move it. Rain stopped at 10:00 a.m. and they started again, with a new employee in that morning who "knew" all about diesel motors! At 10:30 I ordered them to put their wrenches down, and leave our Motor Home alone! I had decided enough was enough, and could not tolerate this anymore, as nothing new or different was being done to fix the problem.

I called CAA, our Canadian Roadside Service, who put me in direct touch with AAA in Lake Wales. After explaining the proplem to AAA, they indicated the trucks were busy on Friday, but they would be with me within two hours. There were some traffic accidents in the area. 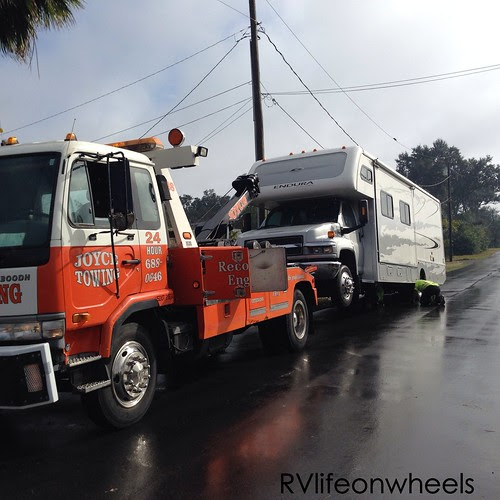 In the given time period Joyce's Towing, out of Lakeland, Florida showed up to our rescue. Things immeidately began to get better. Two professional tow truck operators showed up to move our RV to a repair facility of our choice. They asked what was wrong with it, and after the Coles Note version of the story, they recomended bringing the rig to their shop and facility in Lakeland which is a AAA Approved Repair Facility. I said do they do diesel?... yes, they do! I said lets go! 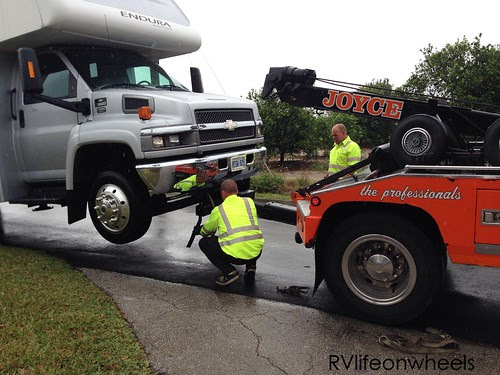 Your right, it is not easy to tow a 36 foot, 20,000 lbs. motor home. You need the right equipment and skill to operate it. They treated our rig like it belonged to them! After they lifed it as you see above, one of them actually crawled under our rig to remove a 5 foot section of our drive shaft, as you cannot tow it 30 miles with that still in, it turning the transmission. I am not sure I would have crawled under.... just saying! 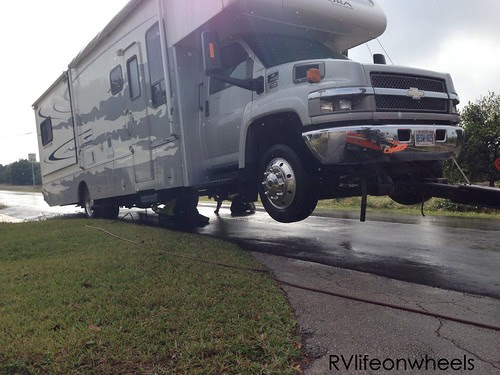 That is the tow truck operator under the rig, removing the drive shaft in the photo above! Good luck! In no time, we were on the road to Lakeland. It was about a 45 minute drive, and Judy and I chased the tow truck in our Jeep. 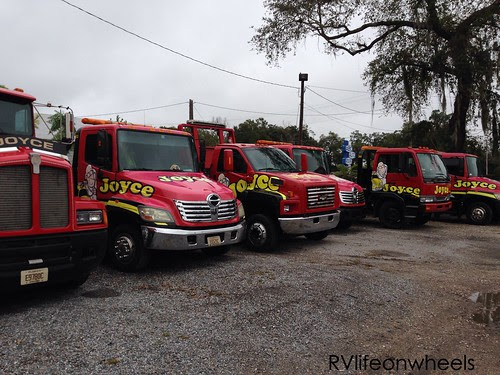 We arrived around 4:00 p.m. in Lakeland, and right away I noticed a fleet of tow trucks in the compound! This was a big Company with about 25 automotive bays for repairs... and they were all full! 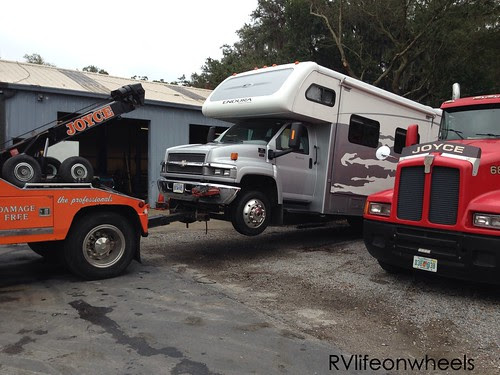 The Owner of the Shop runs out to greet Judy and I shaking our hands, welcoming us to the Facility, and asking if we need a "miracle" today! I said "Yes, we do"... He immediately tells us their goal is to get us going and out of here before they close at 5:00 and if for some reason they cannot, we are welcome to plug our rig into their RV 50 amp power plug, and spend the night with our rig inside the locked compound! Thank you!

Right away, he introduces me to the Diesel Mechanic, who asks me what happened... why would it not start? I have him the extended Coles Note Version of the story. He nods, and grins... and says, "OK, let's getter done!" Right away I was struck with confidence in this facitly and it's people.

He pulls the fuel filter off to find it bone dry inside, and starts to shake his head, saying something like, "Oh boy..." Grabs a plastic tube, and sticks it in the gas tank of one of the tow trucks and syphons out some diesel fuel. He fills the filter till it overflows, and then walks to our rig and installs it on the filter holder. He then give the primer pump about 6 or 7 pumps on the filter housing. Jumps inside the cab, and starts the engine! Right! That took all of about 20 minutes. The Duramax Diesel had objected to all the mistreatments it had received over the past day, and had a check engine light on. He quickly got the computer out, determined what the problem was, and reset the light, and gave the rig a road test. All was good again! We were back on the road by 5:00 heading to Frostproof.

The long and short of the whole problem, was that the Staff at Superlube, did not have the knowledge required to service our Duramax Engine. My lesson learned, is to leave this work to the professionals! Never again will I put myself, Judy, and our engine through this grief!

Many thanks to all the Staff that helped us at Joyces Facility. They were Professionals in the true sense, and I thanked them for our Miracle when we left! There was no charge for the towing, as it is covered by our CAA Membership, and Joyce's charged us $110.00 for the service work. Superlube did not charge us for the filter, which is $95.00 itself, and they apologized to me for the non completion of their work.

Apology was accepted, and lesson learned!

Posted with Blogsy
Posted by The Hollingers at 3:35 PM