The Diefenbunker... What a blast!

Left Ottawa at 9:00 this morning after saying our goodbyes, and pulled into Woodstock just after 3:30 this afternoon, not bad after sitting in a famous Toronto traffic jam for over 1/2 an hour! No city in the world could have any worse traffic then good old Toronto!

I want to show you a bit of the tour we took yesterday, in Carp, Ontario of the Diefenbunker. This is left over from the Cold War Era, however it was in full use up until 1994! The Armed Forces was the major user of this facility, however it was not built really for that purpose. It was built by our former Prime Minister of the time, John Diefenbacher.

After the United States dropped the two nuclear bombs over Japan, the arms race quickly heated up between them and the Russians during WWII. Canada became really concerned that an attack could happen on Canadian soil, so we built the Diefenbunker. Construction started during 1959 and took a couple years. The purpose of the Bunker was to house up to 250 Canadian Government Workers for a period of 30 days after an nuclear attack! Dosn't seem like that long a time does it? The intent was that there would be some people from the Government survive the attack, and therefore be ready to rebuild Canada! Thankfully, we were never attacked!

The Bunker is 4 stories high, and was kind of built into the side of a hill, however is fully burried underground after the construction was finished. Each floor had 100,000 squ. ft. of space, it is big! I have never seen so many offices underground in my life... it is like a small city when you get inside it. No exact cost is known for the building of the Bunker, other than it is beween $25 and $50 Million Dollars, in 1959 Dollars. Do the math from there!

Above is a model made of plastic of the 4 levels of the bunker. These were used during construction to give the workers a general idea of what they were building. As it was TOP SECRET at the time, they told Canadians that they were building an underground communications centre, and they were not really lying... it does have a big radio control room.

On the left is the original guard shack for security purposes as you drive up to the site. They had their own little underground bunker at the Guard Shack, that they could climb down into in the event of an attack!

This is all that you see of the Bunker above ground. This building was not built originally, but was added in the 1980's. It was added for addional security from the Russians. When they were unloading trucks with equipment for the Bunker, the Soviets were watching from spy satelites, so this building stopped all of that nonsense!

This is what one of the American Bombs looked like... it was dropped from a plane. Over 500 were produced, and who knows where they are now!

Once inside the building, you enter these doors to the 300 foot blast tunnel that leads underground to the main bunker entrance.

This is the main entrance above... kind of looks like the vault door we used to have at the Royal Bank...

If you entered the Bunker with any contamination on you, you had to go through two showers and dispose of all your clothes...Judy and Paige are in the shower room...

Yup, that is the gieger counter above... have to check you out!

There was a fully equipted Hospital in the Bunker with the people to run it! At the time it was all state of the art!

You can see two slots in the wall above this desk... this is where all top secret messages came into the Bunker and were encryped if necessary or de-coded... There are still a few of them on the desk...one of them said "pick up a loaf of bread", however I am sure that is some secret message that the Russians would only know about!

Check out this Manual above... leave it to our Government!

Above is 1 of 3 emergency escape hatches! Kind of freaked me out... why would I want to leave??? Anyways, this hatch is in a room all by itself... you had to crawl inside this box hole and put a suit on.

You can sort of see this dummy standing in the first part of the hatch above... he is standing beside a tunnel that leads up to the roof of the bunker. The tunnel is full of over 100 feet of gravel! You would pull a handle, and the gravel would spill out of the hatch just beside and below you, and then you would climb a ladder up the tunnel to the outside. The gravel would protect the bunker during an attack from radiation...ya, right!

Most of the original equipment is still inside the Bunker... above is part of a radio room for communications...

This stuff would fit into the palm of your hand today probably...

They had communications set up right across Canada our of this room.

You needed somewhere to eat and relax to relieve the stress of living in a Bunker we were told, so this is it above...They were dart boards set up, and TV's to watch.

Not sure how good the meals were, but they had all the stuff there to make em...

I can't tell you about this room above... I would be arrested if I did.

You had to store the beans and wieners somewhere...

Above is National Defence HQ. This is where all the action took place, and the security level was the highest to get in here even. Paige was trying to call Puttin but was having problems...

Above is where all the big decisions were made...board room style. The heart of the Bunker!

They had maps of the world set up everywhere... it is all still there.

This is an average office in the Bunker, that could sit 6 to 8 workers. There were a LOT of rooms just like this one... I could hardly believe it. They have hundreds of the old IBM Typewriters... I used to use them at the Bank in my day.

These three pictures above I throw in for my friend Rick out west... check em out Rick! I am sure you worked on machines like these when you first started out in computers. The computers in the very top picture were STILL WORKING AND TURNED ON! These were in use up to 1994!

Paige and Judy are checking out living quarters for some of the female workers... 6 to a room on bunk beds. Good luck trying to sleep!

The CBC had it's own studio in the Bunker... the two pictures above show it. The idea was they would broadcast to Canadians on Radio and TV in the event of an attack, and tell you what to do....if you were still there to listen....or maybe you were hiding in your own bunker...

Now, the Prime Minister was no dummy, and took care of himself in the Bunker. This is his office above... check out the ash tray on the desk!

Right beside his Office, he had room for his Secretary, Paige. She was trying to get the U.S. President of the phone, but he was not in the White House...

The Prime Minister of course, had his own bedroom, right beside his Office... you almost would have expected it to be more... wouldn't you? The door at the back led to a very small bathroom. At least he had a mirror and a night light!

This room above, is a very big vault. It belonged to the Bank of Canada! Yes, they used it to store Canada's gold reserves! A lot of gold could be stored here... however I could not even find one little piece... the vault door is huge, and took 4 people to turn combinations to gain access.

This post has turned into a monster... however I took way too many pictures. I walked up to the top of the Bunker outside and you can see the top of one of the excape hatches above...(Plastic white dome...) This bunker is in the middle of nowhere, about a 45 minute drive to the Parliament Buildings.

Not to worry though, as they could land a copter.

Well there you go... if you get to Ottawa, you can check it all out. I really enjoyed the tour... they gave you an iPod for a self guided tour, and it had lots of info in it! It does cost $14.00 to tour this facility.

Posted with Blogsy
Posted by The Hollingers at 6:11 PM 4 comments:

We enjoyed another great full day here in the Ottawa area. This morning we headed off to the Chapters Store, in Kanata, and took in the Story Time that is delivered to the kids every Friday morning at 10:00 a.m. Chapters puts this on for free and is very popular with the kids... they also sing songs, and do some crafts as well. 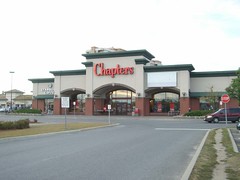 Chapters does a very good job of presenting Story Time with a dedicated Staff Member that is real good at it! I did not take pictures during the Story Time to protect the innocent...

Paige liked the couch they have for reading on...

Granny and Paige read a few books in the Tea Cup Seat that Paige really liked!

After we left Chapters, we found a nice little park for Paige to blow off some steam at... she made a few friends here. Emmie of course was in School all day, so it was our day with Paige.

From the picture above... you can now guess where Paige wanted to go for lunch! What kid does not like the Big M!

What a blast we had in the afternoon...but things turned real COLD... as in "Cold War" that is! We decided to take the 10 minute drive out to Carp, Ontario, and tour the Diefenbunker!!!! How many of you remember that place... it might not mean much to American readers of the blog, but to Canadians, it just might bring the Cold War into focus!

As a teaser... here is my favourite pic of the day, of Paige and I in the Blast Tunnel leading into the Bunker! The Bunker Blog is for another day however, as it is a storey in itself.

Posted with Blogsy
Posted by The Hollingers at 8:54 PM 2 comments: