How big can The Big Smoke grow?

One thing that Ontario can claim... it has the biggest City of any Province in Canada...

The Downtown core has really grown in the past 10 to 15 years, with now over 300,000 residents living in newly built Condos. Well, hang on...it is going to get worse.

Toronto City Council approved at a Council Meeting today, lead by Mayor Rob Ford of course, a further 18 new buildings to be constructed in the Downtown core area. This accounts for 775 new stories of fresh Condos for people to live in, or an amazing 7,000 new condos. Now, it may take much of the next 10 years to complete this work, but it is coming. Oh, don't forget to add in an additional 70,000 new homes that were also approved for construction! Seems like Ontario will have Canada's largest City for quite a while! The value of this new construction can only be measured in the Billions! Just think of all the new Toronto Maple Leaf fans that will be able to cheer for the Team! Good luck trying to get a seat to a game! (Hhhhmmmmmm...... maybe Toronto could have 2 NHL Teams.... just saying....)

There are now over 5,000,000 people living in the Greater Toronto Area, (GTA) which kind of blows you away when you think about it. The Province of Manitoba has a total population of 1,200,000 people!

I do not disagree with all this new construction... I think it is all good for people wanting to live a life in a terrific City in a great Country! I do have one concern though... and that is transportation. It is darn near impossible to drive around this City now... it always feels like rush hour, at any time of day! 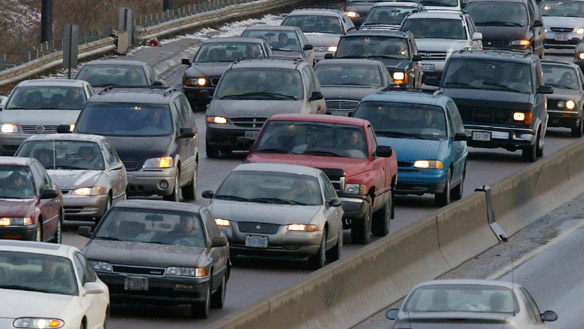 We cannot have every road in the GTA looking like the one above... can we? Many political agruments in this area are about Public Transportation, and how much we need. All I can say is, they better get it right, because it is darn near broken now. It will be very interesting to see what it is like trying to drive in Toronto 10 years from today!

Posted with Blogsy
Posted by The Hollingers at 7:02 PM