So, the mystery has finally been solved!

This is one story that may have not crossed your news radar screen today, but it hit mine, and was reported by Media all over North America.

I read the Story in the Toronto Star... This was the Headline: "What's making the rocks move silently across California's Death Valley?" I thought to myself - Hey, I have been there. A quick search of my Blog quickly led me back to March of 2011. Judy and I had just finished a visit to Dave and Angela over in Lake Havasu City, and we headed up to visit Death Valley for a week. It was on our hit list of places to visit...

This is a great place to visit, and you can easily spend a couple of weeks here! I loved every minute we spent here, even if it got up to 105 F. while we were there. We even made the 25 mile Jeep trail out to the Dry Lake Bed, where the famous "moving rocks" are located. The road was terrible, and meant only for a high clearance 4 wheel drive vehicle, so the Jeep fit right in there.

I took these pictures out on the dry lake bed. 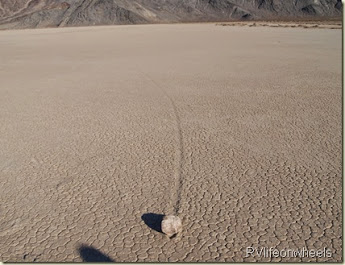 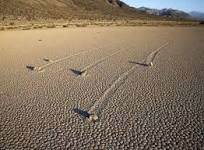 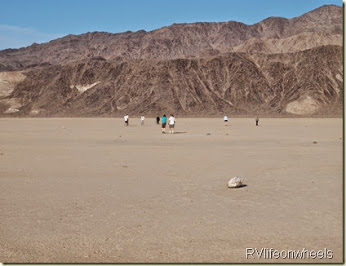 Now for the life of me, I could not figure out what made those rocks move, and leave a trail behind them. It does not happen all the time, and people started wondering back in the 1940's what made them move. Now we know!

Four Scientist spent last winter working on this problem, and they just released a paper about this, in Plos One. They placed 15, 8 to 15 Kg. limestone rocks out on the dry lake bed, or playa, and attached GPS's to each one to track any movement. 12 out of 15 of them moved!

Jim Morris, Richard Norris, Ralph Lorenz, and Brian Armstrong were the four Scientist that presented the paper. Here is what they found. There was some rain on the dry lake bed over the winter. In the early morning, this thin layer of moisture actually freezes under the rocks. Everything is very slick. When a bit of wind come up, it actually blows these rocks across the lake bed, leaving a trail behind. What a mystery! Now, they did go on to say that no, they did not spend thousands and thousands of $$$$ working on this paper. They did it on their own time, just because they wanted to. They actually were there watching as one rock moved about 3 meters in under 6 minutes. That would be like winning the lottery to see that.

Anyways, if you have not been to Death Valley, GO!!!!!! It is an amazing place, and you don't need a Jeep to see most of it.

It was great to read the comments on last night blog. Trent and Terresa left a comment, about how we met. I sort of forgot this one. Judy and I were walking around the College of the Desert Market in Desert Hot Springs, and Trent picked us out, and said, "Hey, RVlifeonwheels...the Hollingers" Trent and I had both bought the same hat at the Market... good times. Janet S remembers picking me off while stepping down out of an RV at the Tampa RV Show. Guess I must stand out in the crowd... maybe it is my big nose!

Posted with Blogsy
Posted by The Hollingers at 6:42 PM