They threw everything at us today!

Quite the day we had today!  Started out great as we gathered up all our earthly possessions and loaded them into the motorhome, and said our goodbye’s to Lake Havasu State Park.  We had a good two weeks here!

Headed north up Hwy. 95 to Hwy. 40.  Made a quick stop at Wal-Mart to return a Red Box DVD, and pick up a new power cord for our GPS… our 4th one!  They keep breaking!

I love the rock formations you find up around Kingman, as you head east on Hwy. 40.  We had a real grey sky, and it looked like rain… or something else! 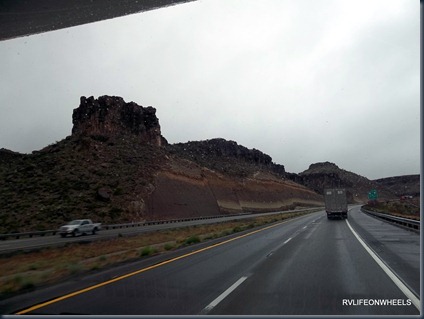 “Oh… look dear, it snowed way over there in those mountains… isn’t that great!  What a diverse climate we live in here…” I said to Judy as we motored along… 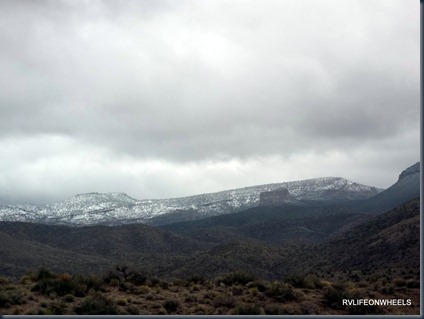 “Oh look dear, just as we pass 5,000 feet of elevation, we always seem to see a skiff of snow!  Isn’t that nice!” I sad to Judy as we continue to climb! 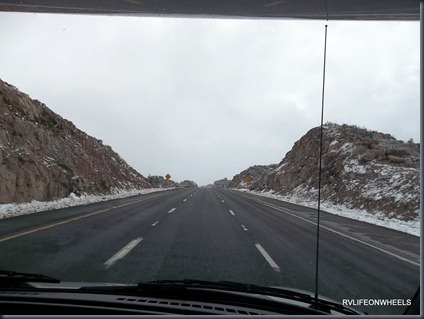 Of course, you get the picture by now… we headed into a full blown snow storm.  We were 36 miles west of Flagstaff, and the Highway just stopped dead!  It was snowing hard… the picture below is of the bush we were near… closing in on a couple feet of snow in spots… We ended up stopped right on the highway for over an hour!  It appeared they closed the road simply as there was too much snow, and it was icy.  At least it was right at lunch time, so we enjoyed our lunch inside our RV!  Yes, one of the benefits to driving a motorhome!  We also have full access to our washroom, so all our needs were met out on the highway, as everyone else kind of just looked at us… 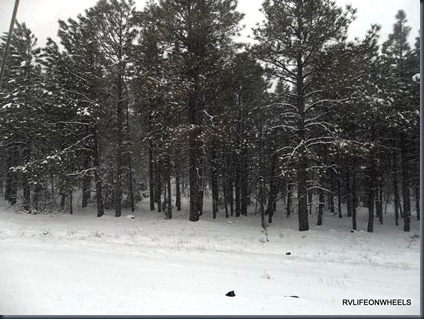 Finally, after an hour, we got moving again… they had some snowploughs out, but no sanders for the road.  The problem was that the snow very soon, was packed down by the vehicles going over it, and we then had a skating rink! 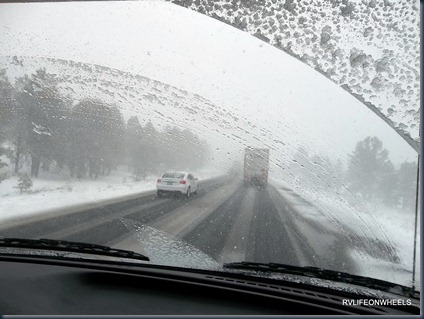 Yes, in the picture below, there is a Highway Patrol Officer, shovelling sand under the back wheels of that transport truck, trying to get him up the hill!  I could not believe it!  That truck just made it up the hill… we were OK with lots of traction on the motorhome, even with the Jeep and Burgman behind! 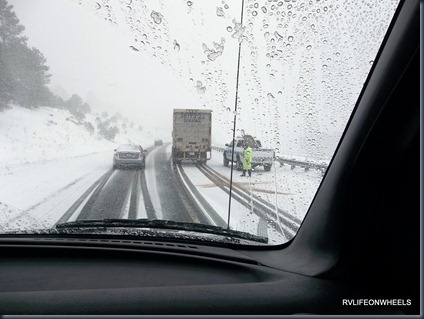 OOOPPPPSSSSS… this red truck rear ended that transport truck behind him… the roads were bad. 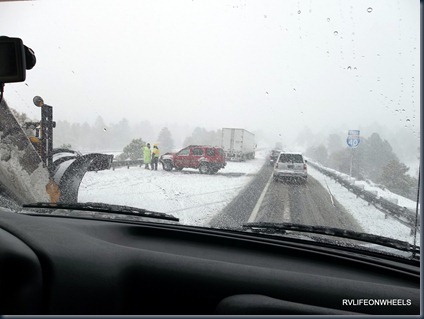 Of course, once we passed Flagstaff, we start to drop back down, to just below 5,000 feet, and more normal weather… well at least we thought so!  All the snow was gone 15 miles east of Flagstaff… however the wind was incredible… coming from behind us, so I did not have to use the gas pedal at all!  Next problem was a monster dust storm!  Check the pic below and you will see the dust in the air!  What else could happen today???  There goes the air filter again! 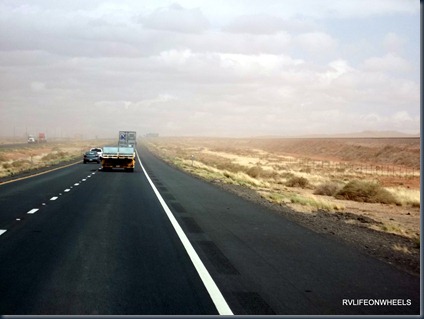 Got past the dust storm, and found the sun and blue skies for the remainder of our ride this afternoon.  We are in the Route 66 RV Park, right near the Petrified Forest along Hwy. 40.  Think we might check it out tomorrow, if the weather gets better! 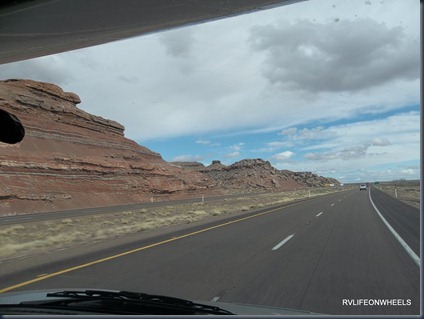 I received an email from Bob in Gravenhurst, and he said he heard there was over 10,000 people attend Friday the 13th in Port Dover… all on motorcycles!  That we be a blast!

Jim and Sandi were asking if they had the chocolate fountain at the Golden Coral in Lake Havasu!  Yes!  They did… I had chocolate covered pineapple!  Was it ever good… 3 of them!  Judy did a strawberry!  What a restaurant!

Real slow internet here tonight at this RV Park, so here is hoping I can actually post this blog!