After we arrived back in Canada last week, one of the first order of business to complete, was changing the phone plan with Bell Canada on our LG Smart Phone.  During the winter, while in the U.S.A. we use what is called the North American Plan.  This allows us 250 minutes a month of making or receiving phone calls anywhere in North America.  This is a good plan that has worked for us the past couple years… this year, with the smart phone, Bell included 500 mb. of data a month so you could use the internet on the phone while in the U.S.  This also worked good for us, and we never came close to going over the 500 mb. limit.

Upon our return to Canada last week, we switched to what is called the “Fab 10” plan by Bell.  This allows unlimited calling to your 10 most favourite people, (if you have that many…) and also included 200 other minutes.  It also gives you 1 Gig of data for the smart phone internet which is good!  A new feature this year, is the subject of today’s blog.  They now included 10 hours of “Free” Smart Phone TV!  I thought right away… “what the heck”    Who would ever watch TV on their phone?

Yesterday, with a bit of time to kill, I figured out I had to go to the App Store, download the “TV” app, and check it out.  As soon as I started the program, I no sooner had the current NHL Playoff Game with Nashville and Phoenix on the phone!  Wait a minute I said to myself… this may be alright!  The quality of the picture was excellent, and you could also hear the sound real good!  I was a bit impressed!

I took a picture below, off the phone tonight.  It is Kevin O’Leary’s new show, on the CBC that is playing, and it give you an idea of what this new feature is all about…. 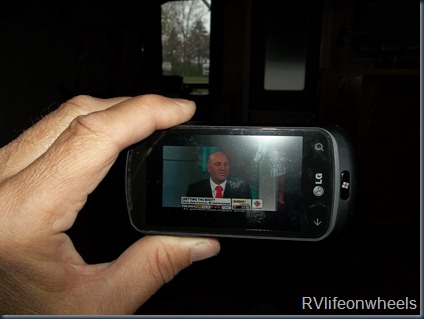 So what do you think people????   Is there a market for this product?   The TV time does NOT count against your 1 Gig data limit… it is separate.  I asked the guy at the Bell Store who would use this product, and he said he has sold it to people who use it at work!!!!  Yikes!  That will effect productivity!

Next problem for me is when would I use this feature?  When I am away from home, stuck for a period of time with nothing to do I guess…

Let me know what you all think about this… would you use it at work???

Lousy day here in southern Ontario… lots of rain… did get into Town and helped Judy babysit Gwenny for an hour… that was about it!

Posted by The Hollingers at 7:28 PM