Getting back to normal...

This afternoon things have begun to get back to normal. Yesterday was a heck of a day. Judy and I were scheduled to watch Emmie for the day, as Andrea flew back to Toronto at 6:45 a.m. and then Shawn and Jenn were to fly back from Vegas for around midnight last night. Some mechanical difficulties cancelled thier flight from Vegas to Atlanta. They were re-scheduled on a later flight, but that meant they had no way to make the connector flight from Atlanta to Johnson City, (where they live). So I got elected to drive down to Atlanta, Georga, at around 7:00 p.m. last night to pick them up after they landed. It all worked out, and as I mentioned we got back to their house around 5:00 a.m. this morning all safe. Shawn got up and went to work at the Hospital for 8:00 a.m. - yikes, hope nobody was too sick on him today!

Yesterday we had a wonderful day with Emmie, and then again this morning, Jenn and Emmie, thier neighbour Kara, and her to kids, Ella and Fisher, all decided to come out to Warriour's Path State Park, and have a play period, and then come to the RV for lunch. We had a great time today with them. Emmie is a ball of fire, and is getting good at talking now, so we can understand her about 80% of the time.

These 3 pictures will give you a good idea as to what type of day it was...it was up over 25 degrees C. 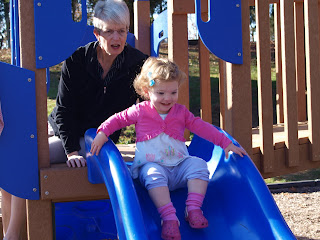 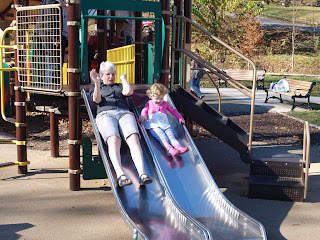 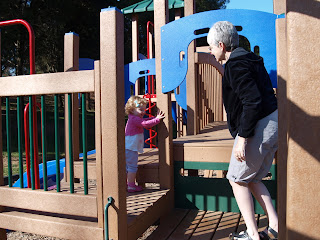 Judy made lunch yesterday for the group, that is Andrea, and Chris, husband to Kara. 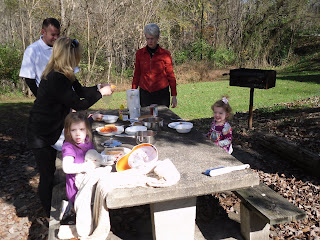 I found these birds rousting in a tree in the park: The look an awful lot like buzzards! They are big.

Today we decided that we would sign up for another 7 days here in Tennessee at the State Park. The weather looks good going forward and we are having too much fun with Emmie, and Shawn and Jenn also....

Might spend some time taking some wallpaper off in a spare bedroom at their house that they want to convert to Emmie's bedroom so the new baby will have Emmie's old bedroom.

Kind of tired, so might go and lay down and rest for a while... you can do that when you are retired!

Posted by The Hollingers at 2:25 PM