The one thing about living in a RV, is that at times life is unpredictable! Yesterday, was one of those totally unpredictable days.

It all started very casually until this unusual RV pulled into our RV Park to camp overnight. 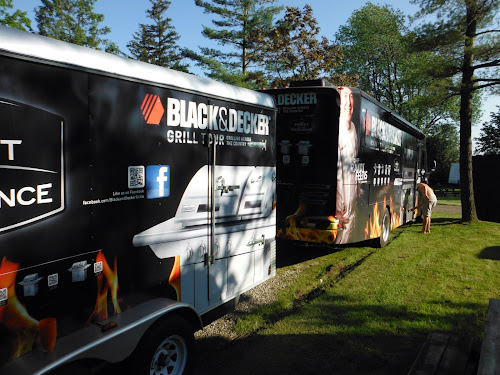 This is a very nice new HR Motorhome, pulling a trailer full of BBQ's! It is the 2013 Black and Decker BBQ Tour! Let the party begin! 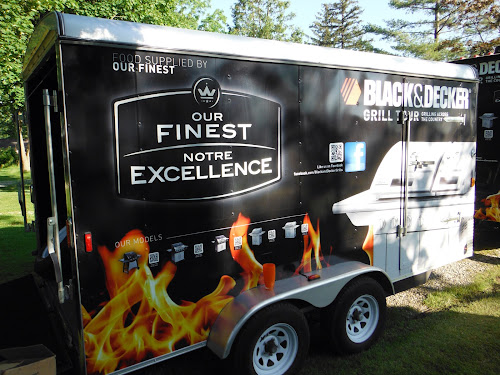 I don't know about you, but I was not even aware that Black and Decker made BBQs. I had bought many tools made by B & D, and always associated them with that! Now, that is all changing. 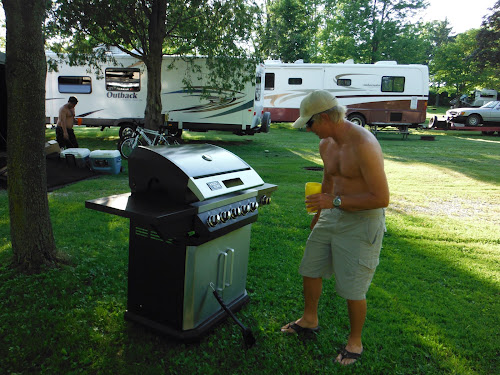 Above is pictured Darin Talbot, who with his friend John, are conducting this tour that started in early May of this year in Vancouver, and has headed east. Darin is in front of the B & D 5500 BBQ, which features 5 burners inside! They set it up, and welcomed anyone to come and cook on it! I did! 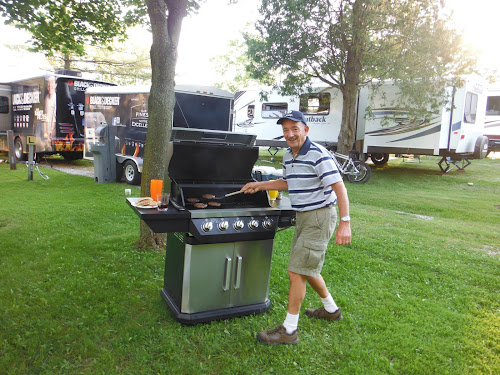 We were sitting with fellow RVers, Sheila and John enjoying happy hour, and decided it was time to cook dinner! I got the burgers going on that BAD BOY of a grill! Too bad George from "Our Awesome Travels" wasn't here to put this Q through the test. I really liked cooking on it... very close to our Weber Q, but this one was a lot bigger... not really RV friendly, is it. This model apparently sells for about $390.00. 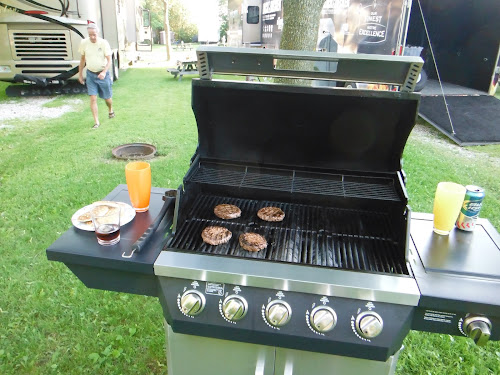 This model had a great steak searing burner on the right had side, and lots of room to cook on as our burgers hardly needed one burner. It was a beautiful night to enjoy a Q.

Then the night even got better. Turns out Darin Talbot is a very talented entertainer! He put on a show for any one in our Park who dared to come and sit by the campfire! Great night to sit out! 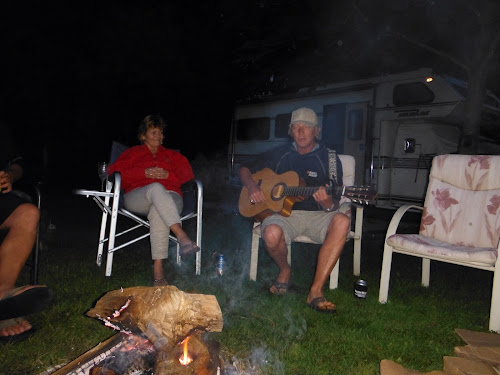 Above Darin is starting into some songs for us by the fire...

Darin is from the Lake Tahoe area of California. He has been a professional entertainer since 1999. He worked for a while doing 5 star Resort work in Costa Rica. He has released 5 of his own CD's and covers many many similiar Artists... I asked him for a Cat Stevens song, and he covered "Moon Shadow" for me, and it was simply EXCELLENT! I was impressed, and could listen to him all night!

Here is how it all works... Darin and John are touring Walmart locations in Canada, (today they did Woodstock) and put on a big show starting at 11:00 a.m. to 3:00 p.m. Darin does a lot of singing and comedy work during the show.

He uses a portable mic, and wanders around singing people back and forth from their cars in the Walmart parking lot! Judy and I convinced Kristina, Chris and the kids to come down and enjoy the show, and a burger today. Had a great time.

Above is their set up at our Walmart today... the Staff from Walmart provide the food and manpower to run the BBQ, and charge $3.00 for a hot dog, or hambuger and a drink to go with it! All funds raised go to the Childrens Miracle Network. To date, Darin told me they have raised over $16,000.00 as they roll across Canada.

By mid August they will finish the tour in Nfld. They hope the tour might get extended to the U.S. but that is still in the works. So now you know why there was no blog last night, as they was simply too much excitement going on here in Ontario... why, Judy and I even stayed out by the fire until 11:00 P.M. can you imangine that????? Crazy!

So, some days you just never know what is going to happen. We wish Darin and John good luck as they finish their tour... you can check out Darin's webite at darintalbot.com

Posted with Blogsy
Posted by The Hollingers at 6:52 PM